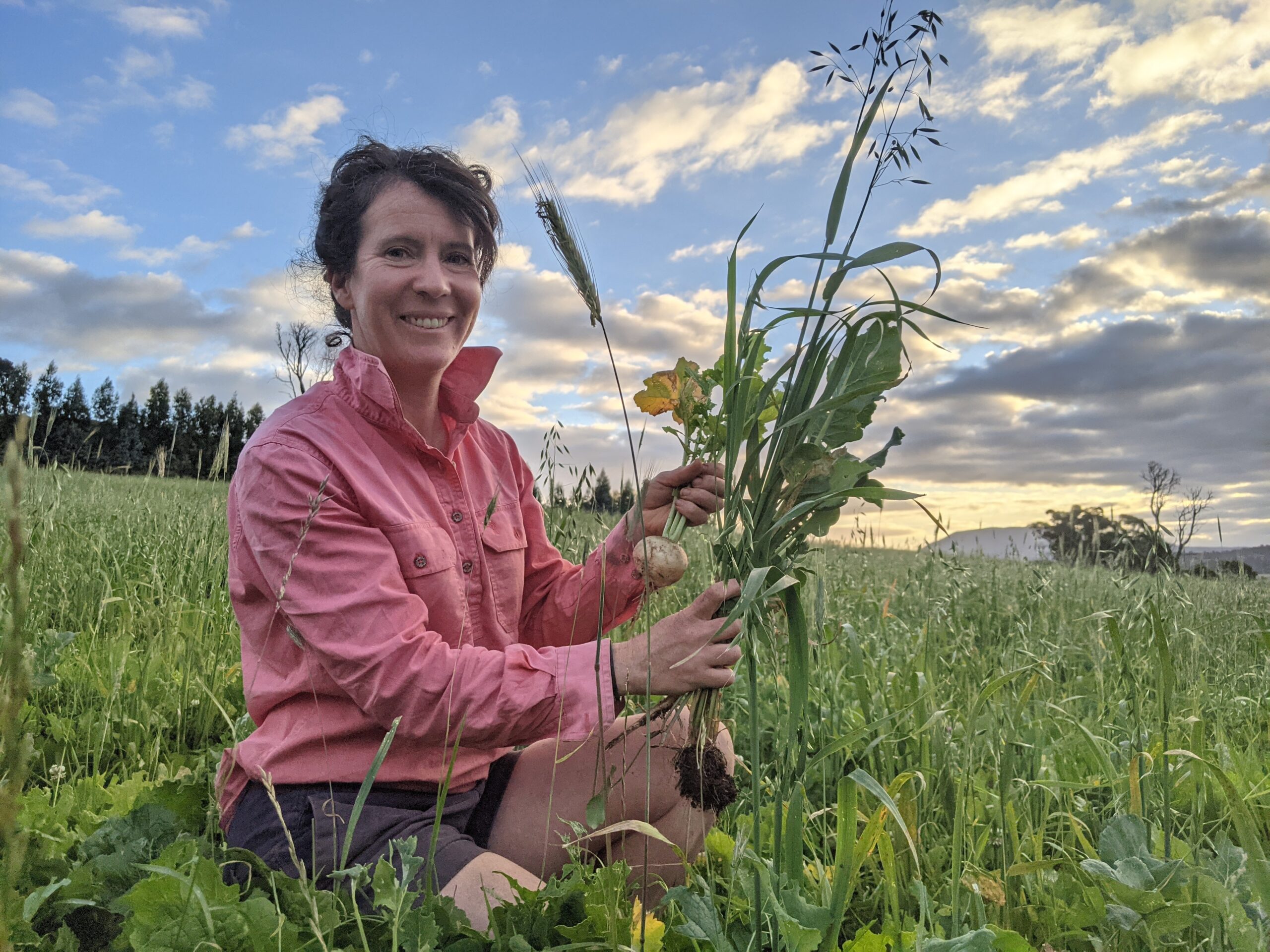 Robin is an agroecologist who lives, breathes and studies regenerative farming systems. In 2018 she was awarded an Australian Nuffield Scholarship and travelled through Europe and North America investigating how regenerative agricultural principles can be integrated into cropping systems.

Robin worked for many years on Tassie’s NW coast as a pyrethrum agronomist working with farm managers of diverse farm operations. She now works as a biological farming and soil health consultant and has a keen interest in nutrition, natural farming systems, photography and all things out doors. 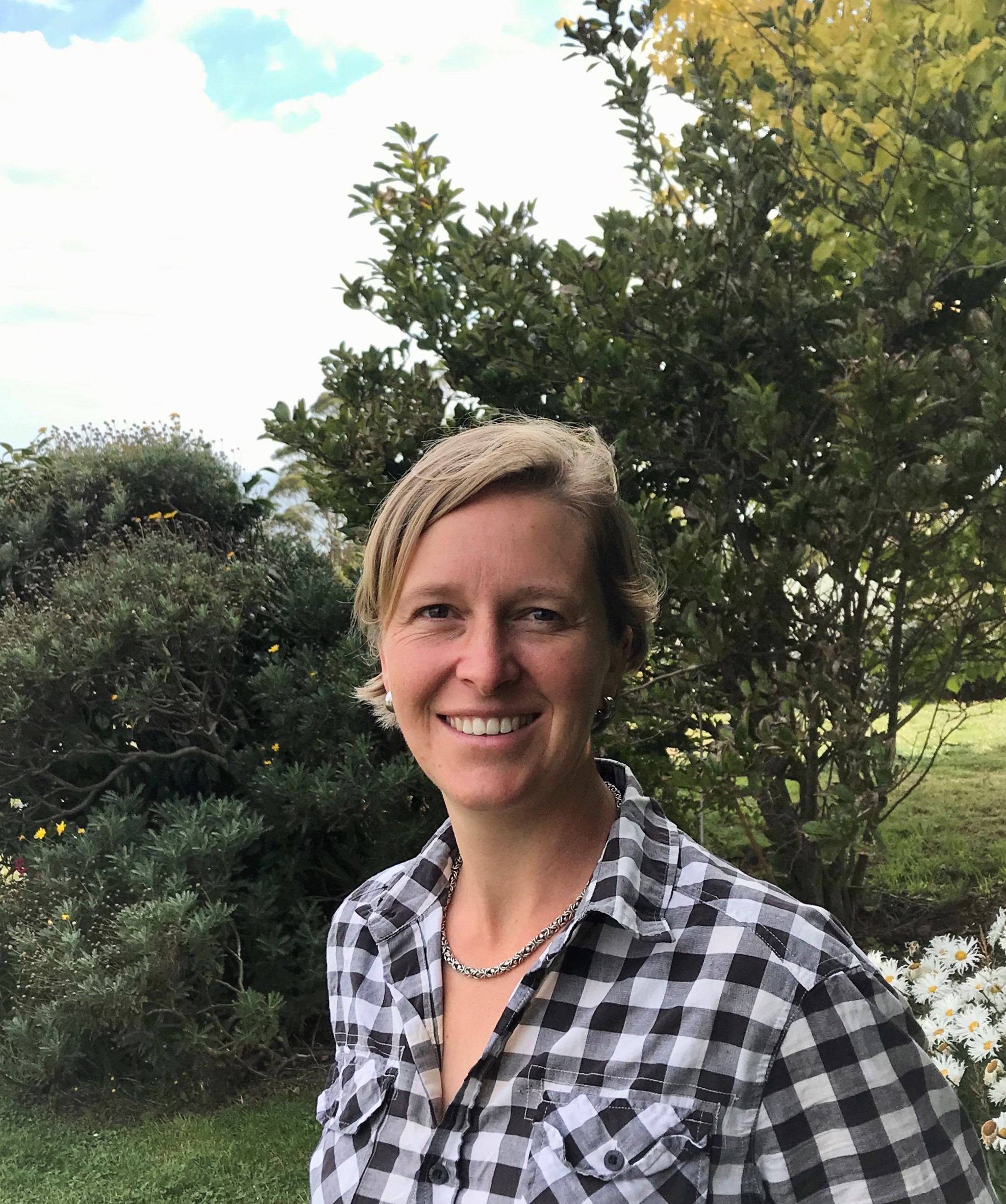 Pippa helps run her family farm, Glen Torrie Pastures, located in the North West of Tasmania, just outside of Wynyard.

For the last 16 years Pippa and her family have worked hard to improve the health of their soil, growing healthy pastures for healthy cows to feed people a nutritious product.

Her light bulb moment came when she realised she talked a lot about how they raised and cared for their animals, how they had tender tasty meat, but they never got to eat any! So began Glen Torrie Pastures Beef Boxes.

Pippa has participated in a number of small business upskilling workshops, and is a member of the Board for Tas Produce Collective, a group that supports and promotes small scale ethical and future minded producers, from vegetable growers to breeders, and bakers. 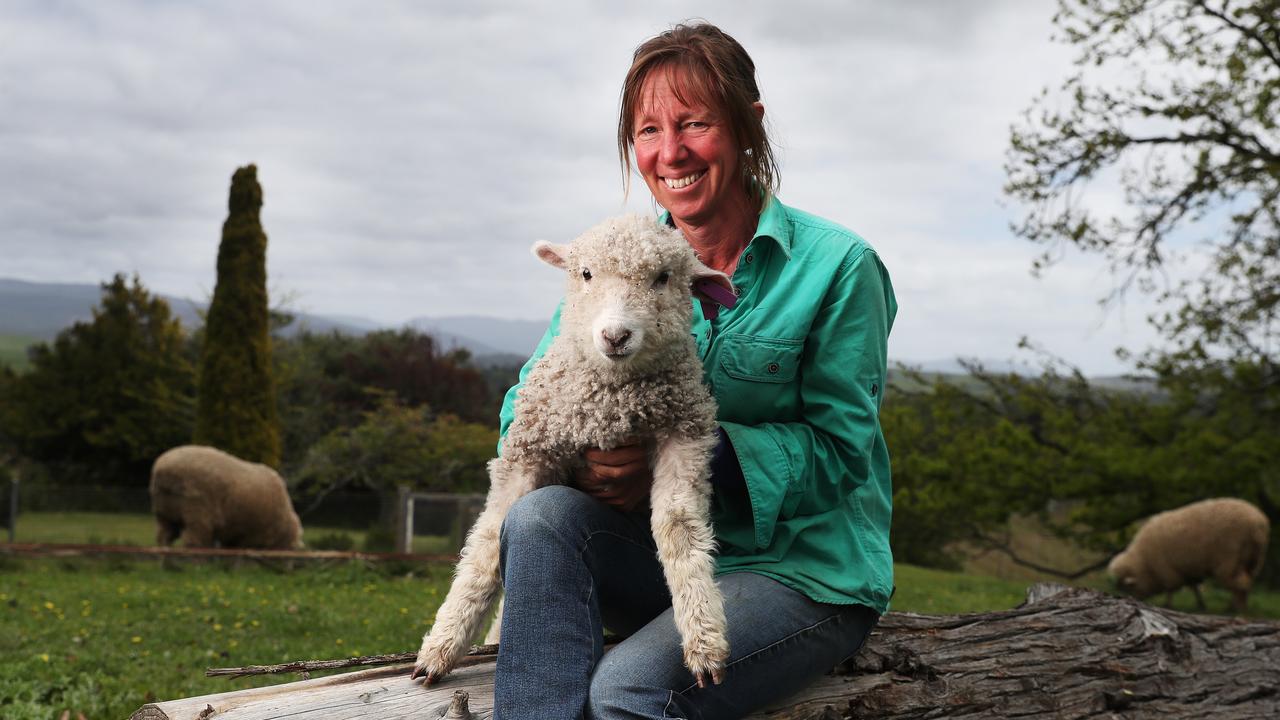 Fi runs Arundel Farm in the Derwent Valley where she runs sheep for wool and meat, including English Leicesters, a heritage breed said to be ‘what sheep used to taste like’. Their flavour is full and rich and their adequate fat content adds a distinct and traditional flavour.

In addition to running the farm, Fiona has 27 years’ experience working as a zoologist/ ecologist, including stints in Antarctica and Macquarie Island studying seabirds. She has also studied seals and Tasmanian devils and has worked for 16 years as a Discovery/Education Ranger with the Parks and Wildlife Service. She is currently completing a Graduate Diploma of Ornithology and conducts seasonal field surveys of threatened bird species such as the swift parrot.

In 1989, Fiona instigated a program of tree planting at Arundel to provide shelter for stock but also to provide habitat for birds and other native wildlife. Since then, thousands of trees have been planted to facilitate biodiversity and to help global climate. 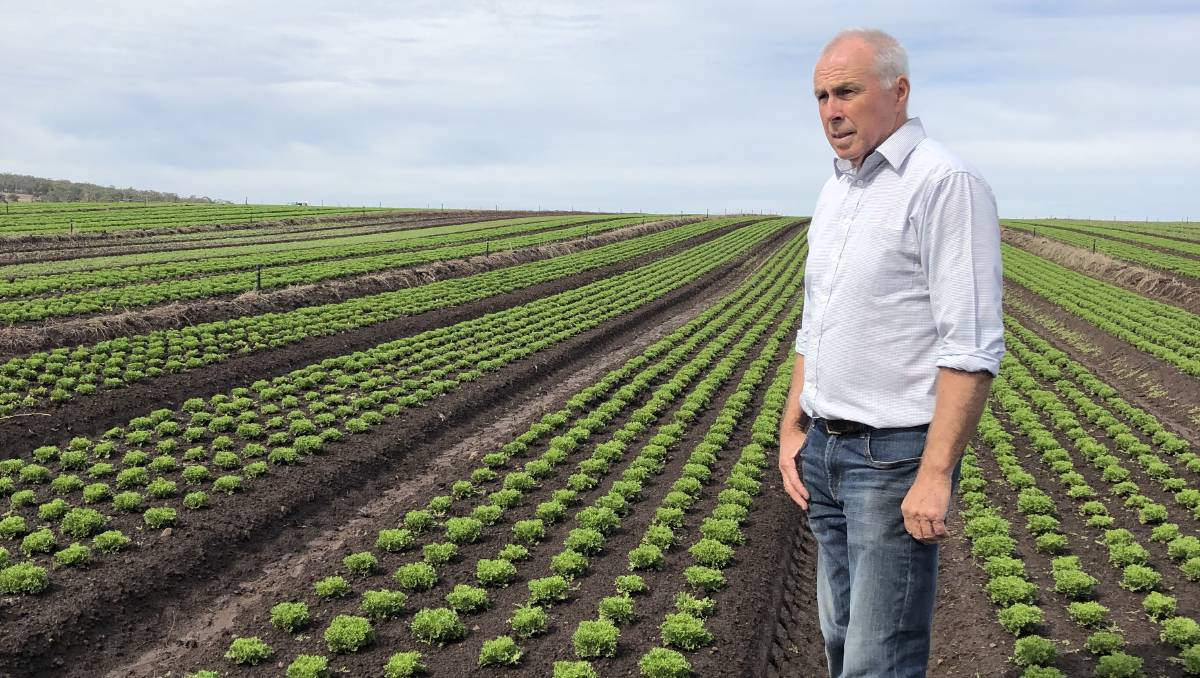 Anthony’s family started farming when he was a kid, beginning with 50 chooks. They had an old friend, Dennis, who for years told them they should grow lettuce, but with no access to water it was never an option. Then, thirty years ago, when the state government built an irrigation scheme and put a pipeline through their farm giving them the water they needed, Anthony rang Dennis and asked him if he could teach them how to grow lettuce. He came over the next day, they fenced off a little patch, planted it out, and watched them grow. From that little patch, Houston’s Farm began.

Fast forward thirty years, Houston’s Farm is now HS Fresh Food, a Tasmanian based farming and food manufacturing company supplying fresh salad products to supermarkets throughout Australia. Anthony has retired from the board of the company but still retains an interest in it. Reflecting on what has happened to the planet in his generation, he got worried. His life changed in November 2019 when he heard the students at the School Strike for Climate speak step up for nature and their lives.

He has since joined Farmers for Climate Action attending a four-day training course in Victoria on Climate Change and Agriculture. While he admits the science was challenging, it all fell into place when they focused on solutions and opportunities. Anthony’s approach is, “turn despair into action, look for solutions and inspire others to do the same. I hope in some small way I can help farmers think about climate change and understand there are better ways of doing things that are good for farmers and better for the planet.”

Session 2 - from Producer to the Pass 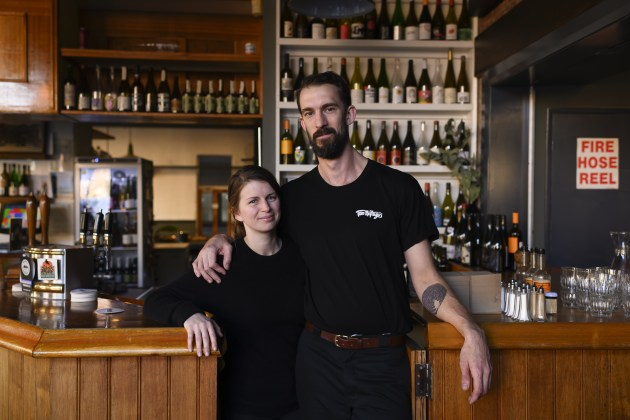 Tom and wife Whitney are the co-owners of Tom McHugos in Hobart. Having both worked at Franklin they took over Tom McHugos in 2016 and place a huge emphasis on supporting local small-scale producers.

Tom has a nose-to-tail philosophy with the menu, only receiving whole carcases and using all the parts, including the offal, but places an equal focus on vegetable dishes. Their support of Tasmanian produce extends to the beer, wine and spirits on offer at the bar.

Tom and Whitney’s aim has always been to be the link between the growers and the diner. They understand the source of the food they serve and their menu is always driven by the produce they source. 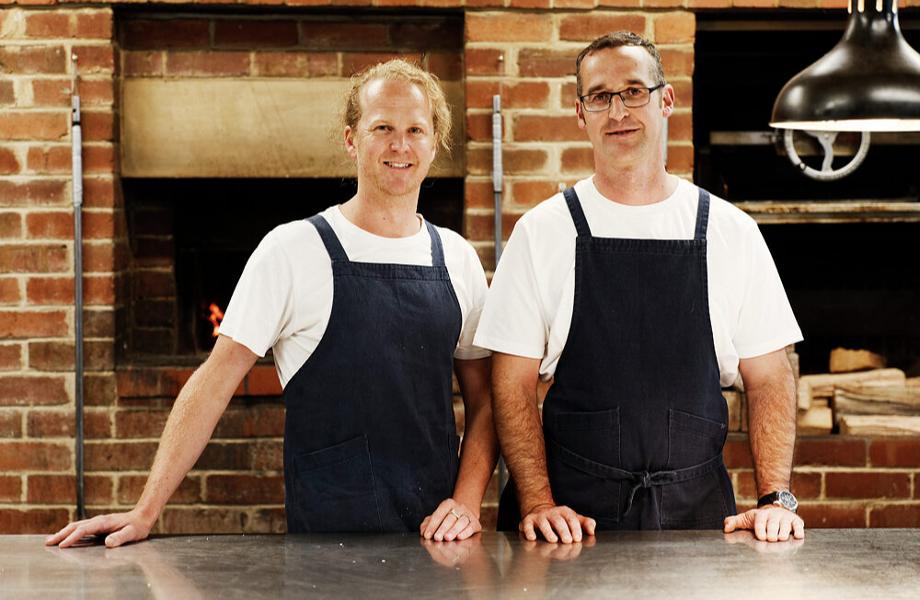 It’s almost impossible to explain the impact that Rodney Dunn and partner Séverine Demanet have had on Tassie’s food scene. Since starting The Agrarian Kitchen Cooking School & Farm in 2008 they have been a destination for all food lovers from around the world.

Rod and Sev’s love of nature, and of growing and cooking authentic food with real ingredients then led them open The Agrarian Kitchen Eatery in 2017. Located in New Norfolk it is a space where local, seasonal produce is celebrated and where the stated aim is to ‘foster a community of local growers, farmers and fishermen through which the mainstay of our ingredients are sourced along with excess from the cooking school’s garden and farm’.

Stephen Peak grew up in Byron Bay, and it was both here and in Queensland where he trained as a Chef and worked in several high-end restaurants. During a stint in London, Stephen was part of a team at Paxton & Whitfield cheesemongers where he sourced cheeses from small scale dairy producers for the retail and wholesale markets.

In 2018, Stephen moved to Tasmania to work at the Agrarian Kitchen Eatery, where he is now Head Chef. It was on a previous trip in Tasmania when he visited the Agrarian Kitchen that he saw an opportunity to focus his cooking on what he is most passionate about; high quality ingredients from local producers. As head chef, he has been able to establish close working relationships with Tasmanian producers and growers bringing local ingredients to the forefront of high-quality dining in Tasmania. 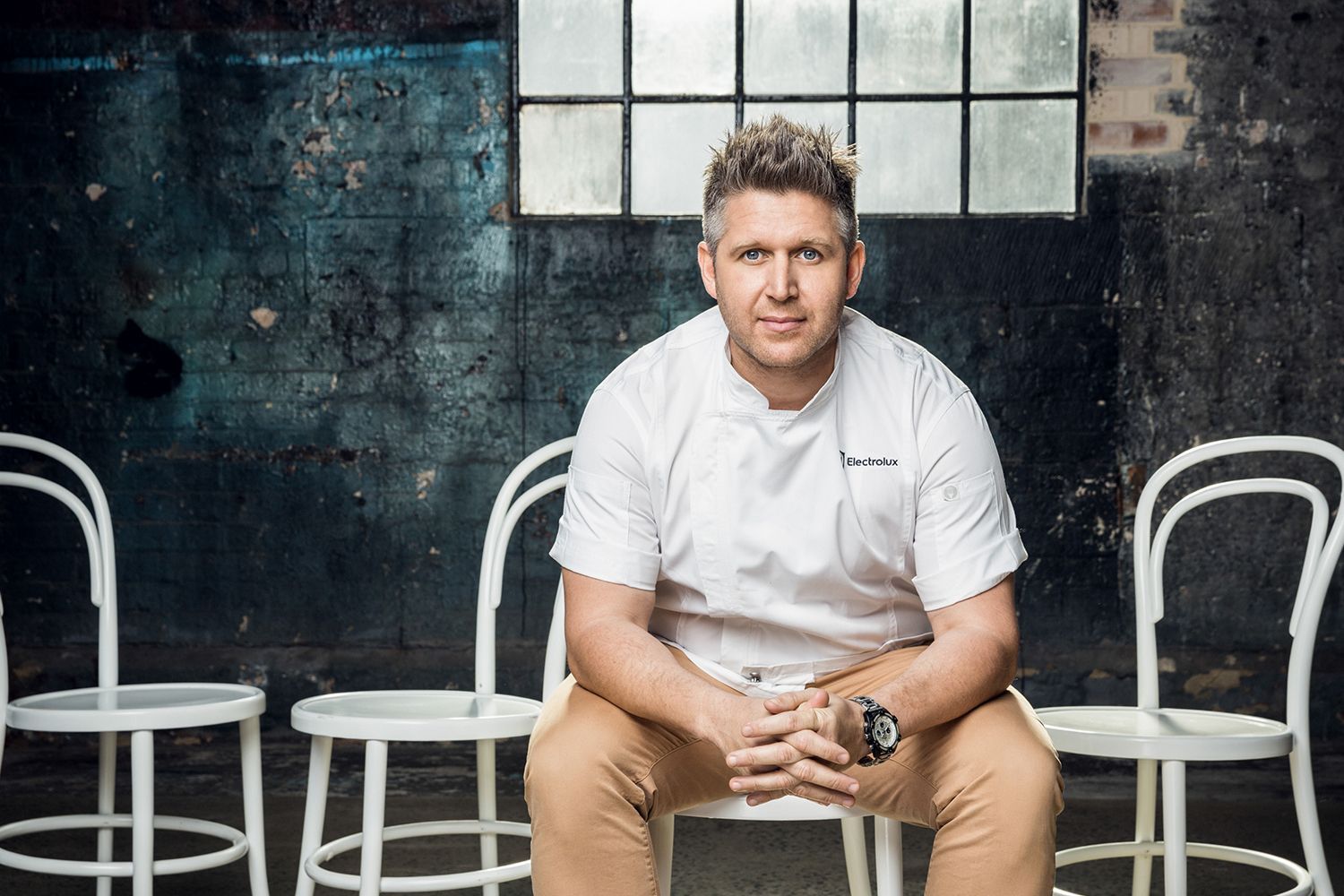 Massimo was born in Tasmania then spent his early years in Naples, and by the time he was eight, when and he and his family returned to the state, his love of food was already formed. Cooking and eating fresh, regional and seasonal produce are in his DNA, and after working in Melbourne, Sydney Italy, Massimo returned to Hobart.

He is the Food Director at Grain of the Silos in Launceston and at the end of 2021 took on the role of culinary director of The Tasman’s new flagship Italian restaurant, Peppina. As ever, Massimo’s relationships with farmers and producers is front and centre of the menu. 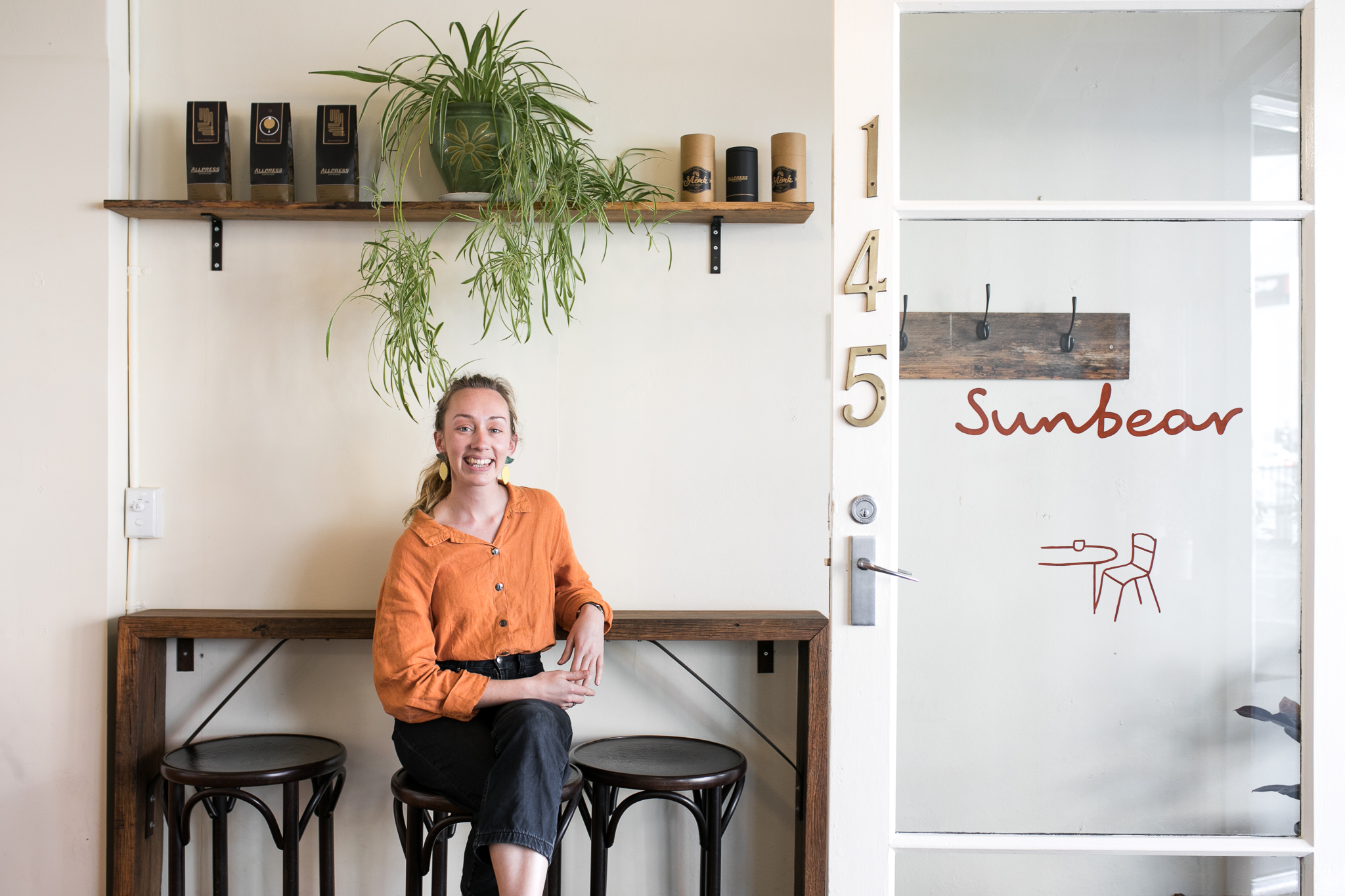 Brooke is the owner of Sunbear café in Hobart. Opened in 2019 following Brooke’s move from Brisbane to Hobart, it quickly became known for it’s welcoming and cozy space, great coffee and outstanding food.

Brooke’s love of anything thrifty led her to design the space as she would her home, sourcing everything secondhand from the crockery through to the furniture and counters.

In the short time that Sunbear has been on the scene Brooke and her team have established relationships with a number of Tassie’s small-scale growers and producers, enabling them to show off a simple menu of small plates that work with what’s on offer locally and seasonally. 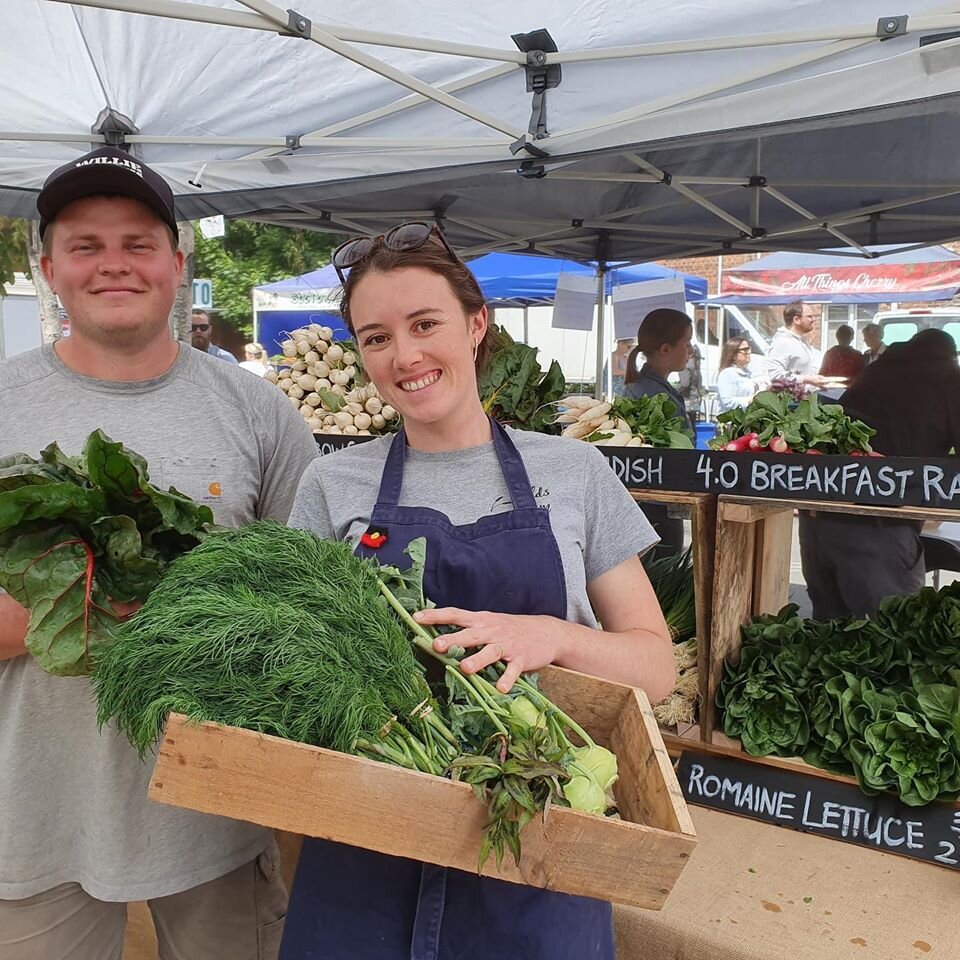 After a collective 17 years in the hospitality industry as chefs, Lauren and Michael’s move to small market gardening and becoming primary producers of vegetables, fruit, eggs and bread was a natural progression.

As chefs they have always been passionate about sourcing local and delicious produce and aligning this with their personal ethics surrounding farming practices, climate and sustainability. When they moved to Tasmania, they aimed to grow their own food for home and neighbours but this quickly escalated into supplying Hobart restaurants and a monthly farmers market.

They now farm on a 4 acre parcel of land at Summerlea Farm in North Lilydale where they grow mixed seasonal vegetables to sell to restaurants around the state as well as at the weekly Harvest Market in Launceston. 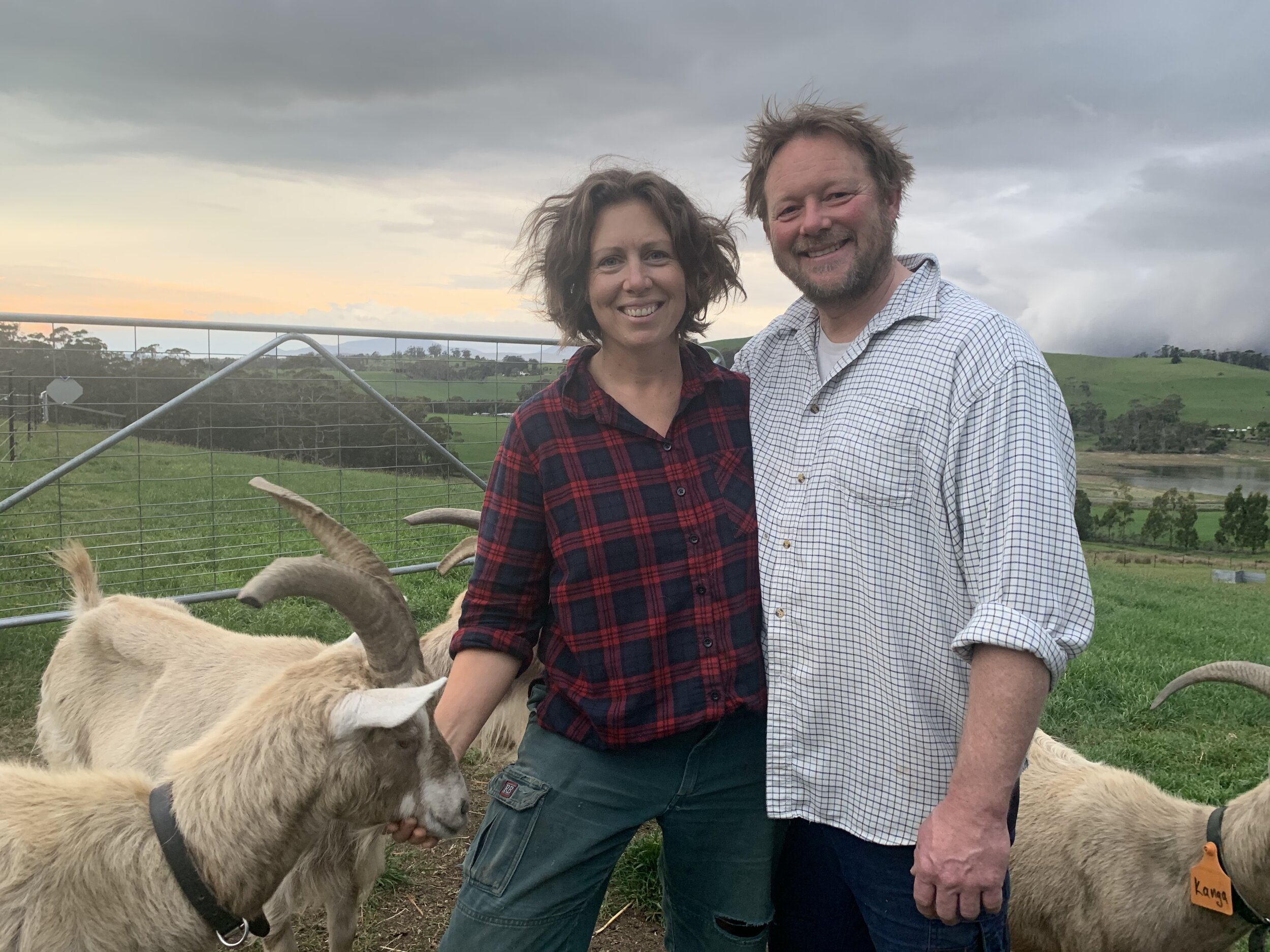 Iain and Kate Field started Leap Farm in July 2012. Iain was lecturing and researching ecology at Macquarie University, Sydney, when he decided that it was time to put the ecological practices he taught and researched into practice. Both Iain and Kate love cheese so the decision to become cheese makers was a very easy one. Returning to Tassie was another easy decision: friends, family and the local food culture dictated that there was nowhere else in Australia they'd prefer to be. And they found the perfect patch of paddock.

Iain and Kate farm Swiss Toggenburg dairy goats and produce the award winning Tongola Cheese as well as beef and goat meat. In 2021 they calculated the carbon footprint of their farm and worked out that they are a carbon positive farm, sequestering three times as much carbon as they emit. 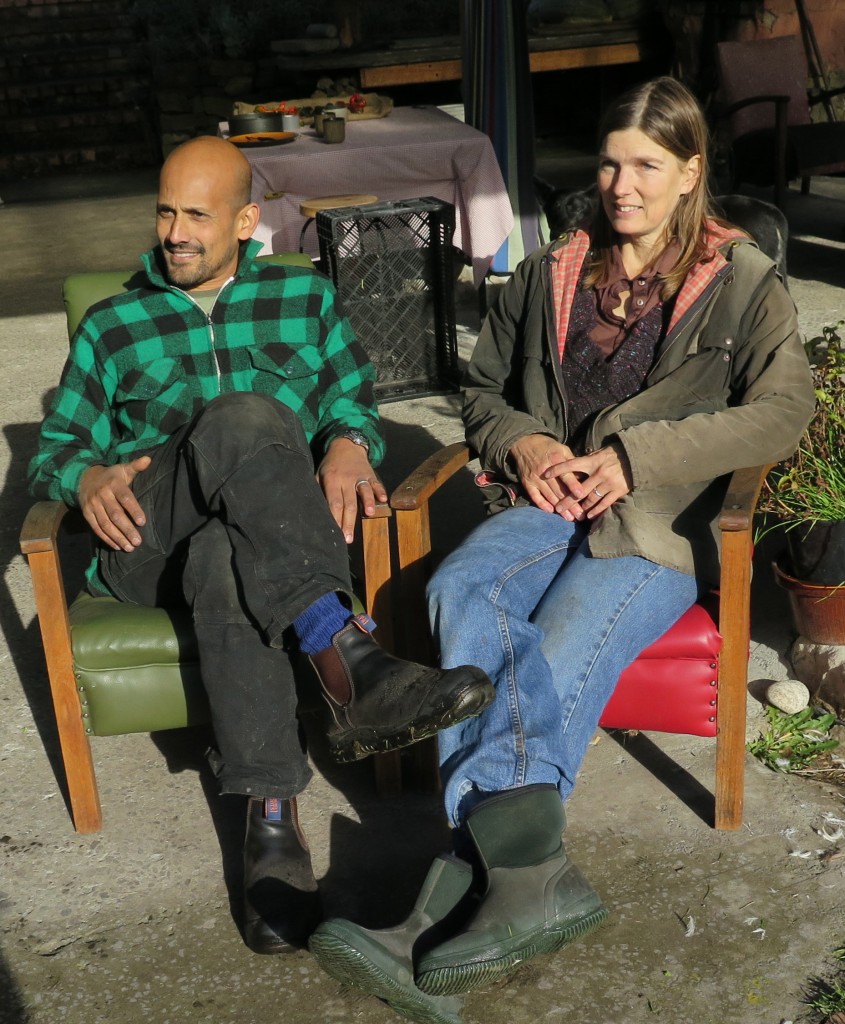 Stan and Briony run Fat Carrot Farm in Oyster Cove, southern Tasmania. They moved to Tassie over 20 years ago, built a house, had kids, started a market garden, and held down full-time jobs. They’re still growing their incredible organic vegetables and continue to supply some of Tassie’s top eateries including Templo and Tom McHugos as well as their CSA customers.

They are also amazing cooks, and their connection between growing, cooking and supplying chefs is significant. To paraphrase Hannah Maloney, they’re so cool, they were growing kale 20 years ago! 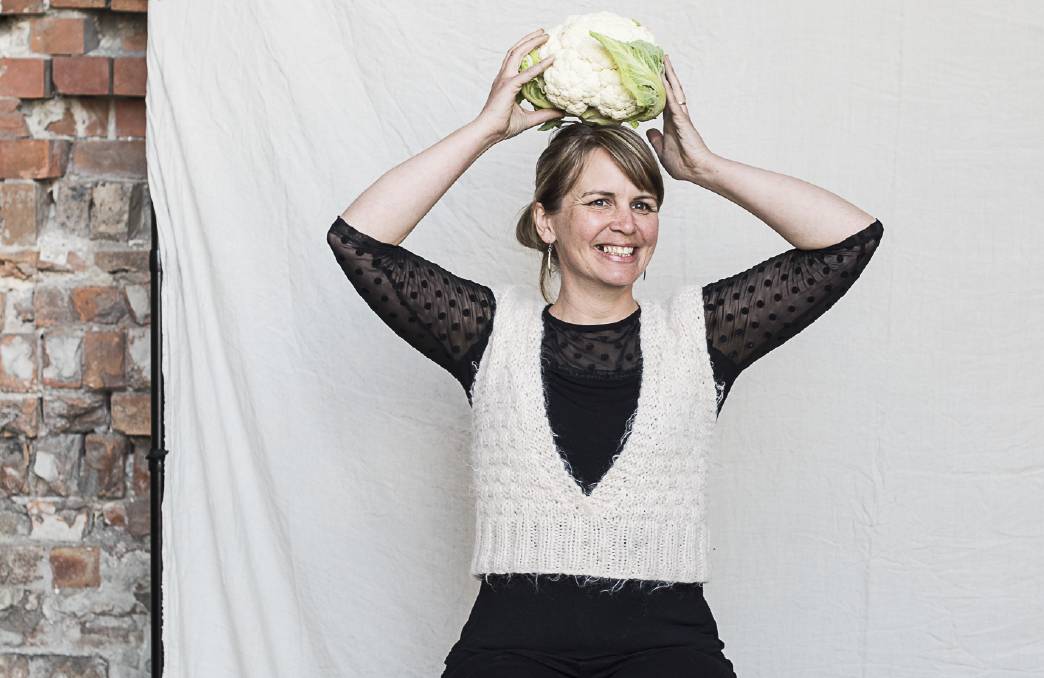 Paulette is widely known for seeking out the most delicious varieties of edible plants that are suited to growing in the Tasmanian climate and for working on ways to give proper cultural acknowledgement to the stewards of the plants we so love.

The health of the planet, communities and human health is at the heart of her work, and guides the way she grows and runs the nursery.

Paulette and Matt sell their produce each Saturday direct to customers from their stall at Salamanca Market and supply some of Hobart’s best restaurants. 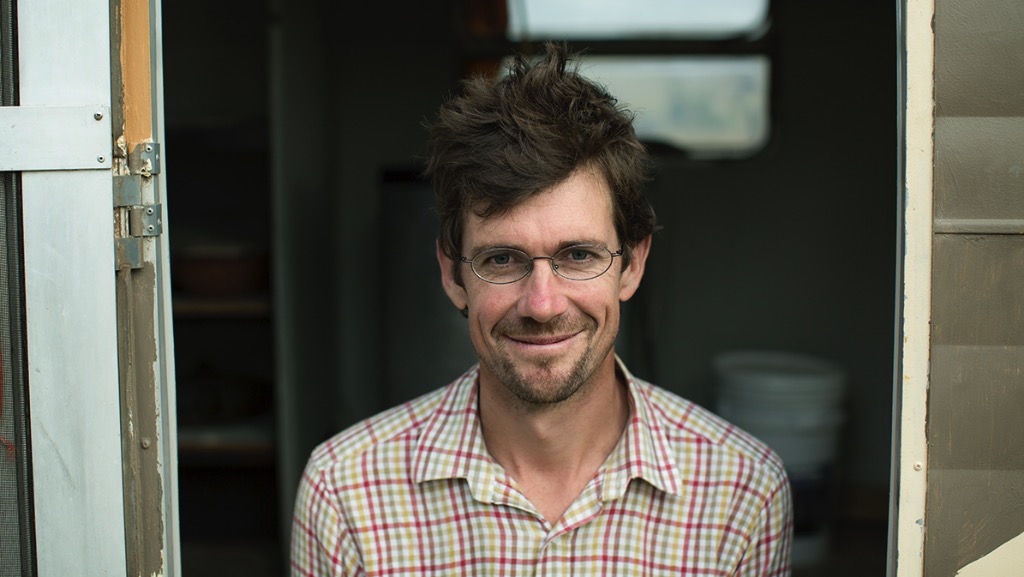 Dan Palmer is a father, husband and homesteader based on a beautiful farm in New Zealand. He is passionate about bringing more life to how he and other humans make decisions in designing and creating their worlds. To this end he created holistic decision making and living design process, which he makes available to others through his blog, podcast, and online courses. Dan also co-owns and co-directs the Melbourne based permaculture firm Very Edible Gardens with his friend Adam Grubb. 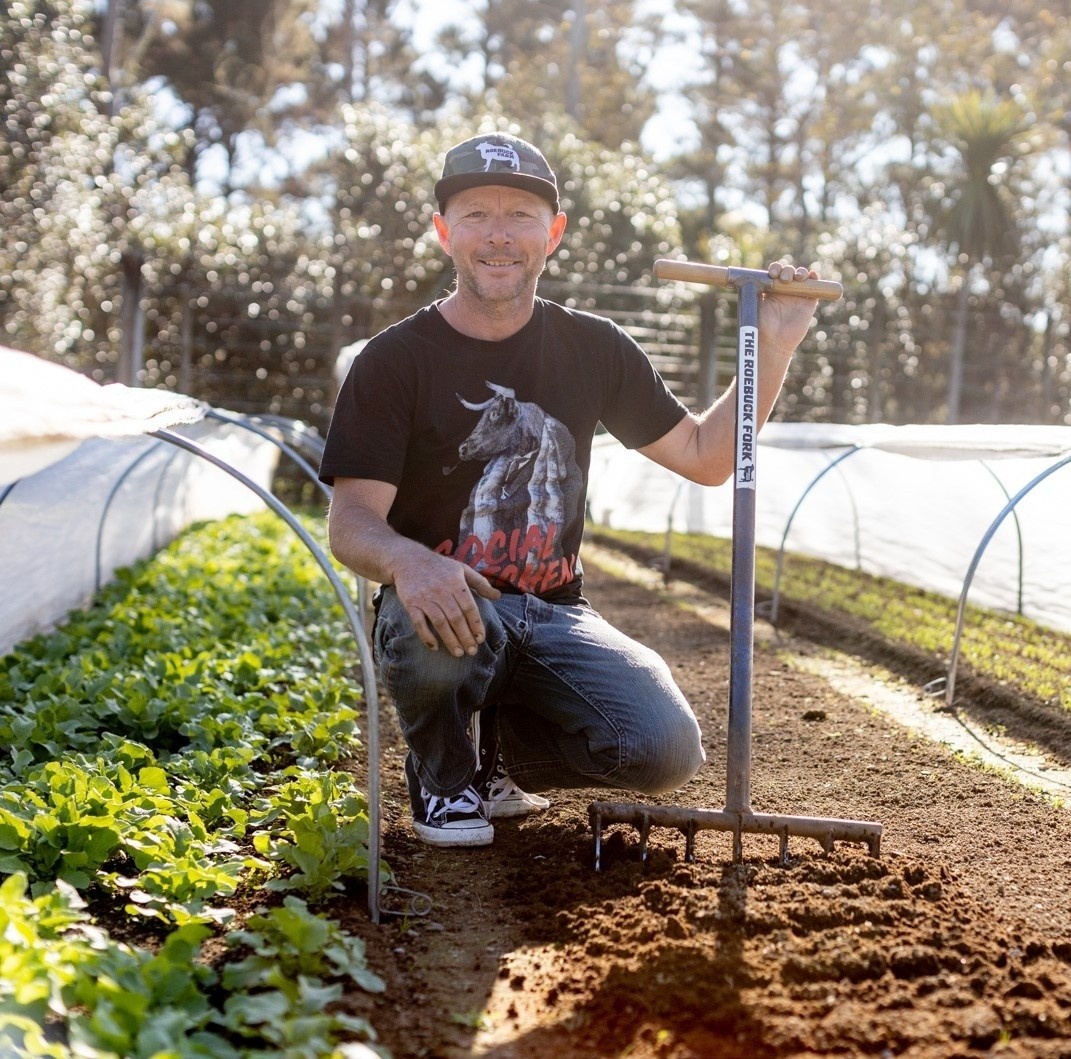 Entering his 23rd year of farming, Jodi has spent his time learning from others around the world like Jean-martin Fortier, and Curtis stone in Canada, all the while following his commitment to regenerative agriculture.

He, along with his partner Tanya, began roebuck farm in New Plymouth on the wild west coast of New Zealand and has established a vibrant, viable market garden and now stock grazing business Roebuck Farm, which supplies the local community with their produce, and is a platform for educating others and sharing their passion.